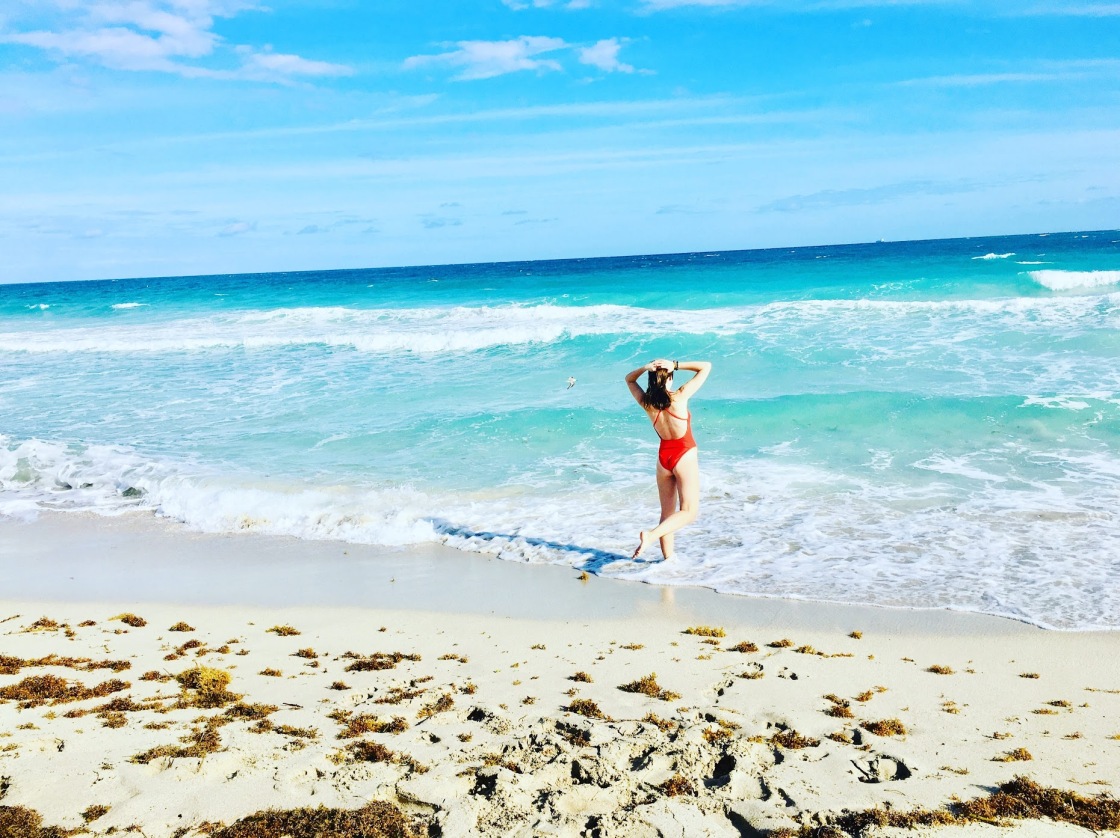 We didn’t have much time in Miami – one day only in fact, but we sure as hell made the most of it! We started with the infamous South Beach aka Miami Beach. Whenever I think of Miami, I think of South Beach, which has become almost synonymous with Miami, spring breaks, latin fashion, etc.

First thing in the morning we changed into our swimming suits and headed for the beach, spending a few hours catching the sun, walking the long flat beach, and taking pictures in the waves and with the iconic lifeguard huts. The combination of my vintage red swimsuit (courtesy of my mom) and these lifeguard huts really brought me back to my days of watching Baywatch as a kid and then becoming a lifeguard myself as a teenager.

From South Beach it was a quick walk or bike up to the Art Deco district. Art Deco is a movement in art and architecture emerging in response to WWI and developing through WWII. It is a modern technique that incorporates aspects of impressionism and cubism.

In architecture, it chiefly portrays simple, single shaped buildings, usually rectangular, with rounded motifs and applied decorative ornaments. The colors are bright and perfect for the perpetually sunny Miami! Somehow this neighborhood manages to simultaneously bring you back to the 1920s, while launching you forward into futuristic design. This neighborhood is full of restaurants and boutiques and is lots of fun to just browse.

For dinner we went to Little Havana! I was pretty adamant about wanting Cuban food and some salsa dancing while we were in Miami. A quick yelp review brought us to Versailles Bakery, one of the best Cuban restaurants in Little Havana. We ordered paella and empanadas since my friend Laura had never had them. The food was incredible and the service was fast and attentive, so we were able to get in and out and on with our evening of salsa!

About a mile up the street, we headed to the Ball and Chain. They had a brief intro to salsa lesson and then we were on our own. The thing I love most about salsa is the people! I am not a horrible dancer, which is to say that through the years I’ve done lessons in ballet, tap, jazz, modern, poms, and ballroom – not that I am proficient in any of them at this point but I have retained just enough sense of rhythm not to be completely embarrassing. In salsa clubs, people are always willing to walk right up to you and ask you to dance. They are strong and competent leaders, and they are willing to teach you! No wallflowers allowed! Laura and I both garnered ourselves a few mojitos and several dances before calling it quits for the night after a relatively long and active day.

While we were driving from Key West back up to Miami, we took a break at the Morada Bay Beach Cafe! I cannot recommend this enough. The whole restaurant is outdoors on a beach. There’s beautifully painted colorful tables and chairs and some loungers. A live Caribbean band keeps you company. It’s also right next door to a marina as well.

Our second stop on Islamorada was Robbies Marina to hit some local craft booths and feed the tarpons. I confess, birds and huge fish are pretty high on my list of fears, so Robbies was terrifying, but there’s something liberating about facing your fears. We bought a couple of buckets of fish and hit the docks, fending off pelicans in our quest to feed the great tarpons.

The first tarpon to arrive at Robbies, was named Scarface. He had had an injury to his jaw, which was sewn back together, and he nursed back to health by the Robbies crew. Even after he was returned to sea, he continued to come back and visit the crew at Robbies, bringing some of his friends along.

The tarpons at Robbies are between 2-4 feet long and will snatch the fish right out of your hand! If the pelicans don’t beat them to it. Thankfully the crew at Robbies will help keep the pelicans away when they start getting too aggressive. The video is on my IG: @thetravelingjules

Additionally Robbies had a beach, cute shops, and loads of bright and colorful photo ops!